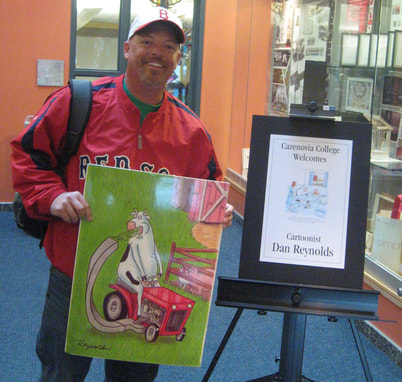 For the past 27 years, Deacon Dan has been a professional freelance cartoonist.  His cartoon work is distributed nationally via American Greetings, Design Design Greetings, and other national greeting card companies.   His work has also appeared in magazines like Reader’s Digest, Harvard Business Review, Christianity Today, Catholic Digest, Chicken Soup For The Soul, Saturday Evening Post, Boys Life, and others.  He has 5 nationally published books, 4 of which are published by Andrews McMeel Publishers (they publish all the Calvin and Hobbes and Far Side books), and his work also appears on t-shirts and textbooks.

His Reader’s Digest artwork (over 200 original cartoons) appeared in a 4-month exhibit in 2011 at the Everson Museum in Syracuse, NY.

His cartoon work has also appeared on national television, once in an opening season episode of THE SOPRANOS, and on the Discovery’s Science Channel.   Last year, two of his greeting cards won nominations for a LOUIE award.  A LOUIE AWARD is the equivalent of the movie academy award nomination only in the greeting card industry.


Deacon Dan grew up Catholic in the 1960's and 70's, oldest of 5 children.   Two of his grandmother Reynolds' sisters were nuns.   He grew up serving as an altar boy, worked for 4 years in the armed services as a Religious Program Specialist working with US Navy Chaplains.   In the 1980's, Deacon Dan visited the Holy Land and visited the Vatican in Rome 5 times.  Deacon Dan was fortunate on one of his visits to the Vatican to see St. Pope John II in person during one of his Wednesday audiences in St. Peter's Square.


After his hard battle with cancer in 2008, using God's love and humor to fight the tumor, he became more dedicated to his faith, learning the preciousness of God's gift of life.   Presently, he is the Coordinator New Evangelization for his parish Divine Mercy Parish.  In this capacity, he has coordinated the parish's religious instruction program since 2012,  as well other catechetical programs and ministries.   Last year he completed the two-year Diocese of Syracuse's Ministry for Formation Program with a certificate in Pastoral Care.


Deacon Dan's DIVINE COMEDY presentation is the marriage of his cartoon profession and his faith.  It is a way to give a living witness to the strength of God's love for us,  how He wants us to feel His love, and how we can bring God's love to others.

Deacon Dan has four boys.  He and his wife live in New York State.